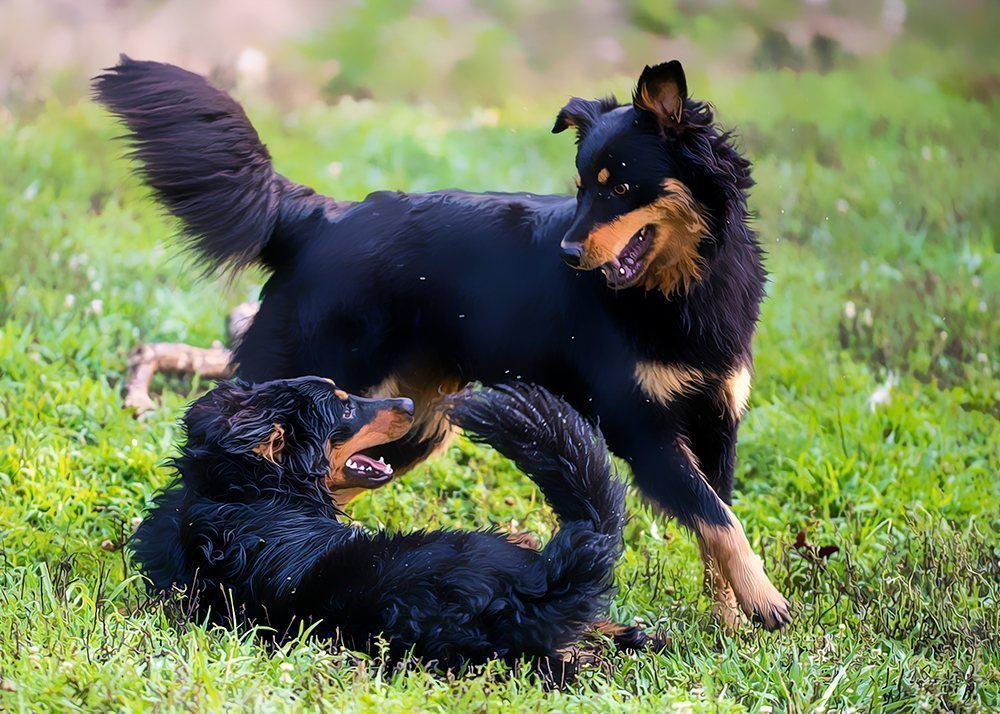 For a century or more, a culture and tradition has existed around the Old-fashioned Black and Tan English Shepherd dog. John Blankenship’s father rode into town on an old gray mare with a black and tan at his side to drive home the livestock he purchased. Walter Oglivie followed on horseback while a pair of black and tan English shepherds drove his cattle over the mountain paths and through the thick woods of the Cumberland Mountains to load them into train cars at Pikesville. After returning home from World War II, war-wounded Major Jesse Ursery acquired black and tans from Tom Stodghill to guard and drive his sheep and goats. And fifty years ago, a Texan named Mrs. Rozelle Snitker spoke of using black and tans to catch and hold hogs, usher livestock into loading pens, and herd sheep from the pasture. Even today, one can still enjoy the childhood stories of Mrs. Judith Young-Sutherland, whose father meticulously bred black and tan English Shepherds on their family’s dairy farm in Ohio.

I have spent a great deal of time studying and researching the history of these heroic black and tan dogs. I have gone through reams of historical newspapers. I have travelled from Kentucky to Alabama, Ohio, and Tennessee. I have met and spoken with the few remaining individuals and families who have attempted to keep this special bloodline alive. Most of the black and tan folks who are still with us are septuagenarians and octogenarians who have retired from breeding. But they have shared stories of their family farm dogs, and they have shared their insights. Many of them lament the intermingling of their dogs’ bloodlines with dogs from other regions. But perhaps the greatest foe of the Old-fashioned Black and Tan English Shepherd has been the advent of the internet and the onset of social networks. In these online forums, black and tan is used as a marketing term to sell dogs or just to describe a dog’s coat color. Online English Shepherd breeders use the term “black and tan” with little to no regard for the culture and history of the traditional, old-fashioned bloodline.

Simply put, Old-fashioned Black and Tan English Shepherds have pedigrees full of black and tan ancestors. By being picky and patient, dedicated black and tan breeders can get down to around an 11-15% genetic COI with these dogs. Long-term, that is probably not quite good enough. We need to get down to 10% or below. So, I run advertisements in several regional farm publications. Every week, I receive phone calls from black and tan folks. Some have dogs that are not known to the UKC or modern English Shepherd Club registry. Some have quality dogs who have never been bred. Most are looking for a dog like they had as a child. A dog like grandpa and grandma had on the farm.

I like to tell my wife that I am not a particularly smart man, but I am a particularly stubborn one. I work with a small group of breeders who are true to the old black and tan line. The folks I work with have a moral compass. We do not produce a lot of dogs, because we do not want to inbreed. We do not receive support from any breed club or registry. It feels like the world has moved on from black and tan English Shepherds. But we few who still care will continue to do our best to breed Old-fashioned Black and Tan English Shepherds because these are the best dogs we have ever had.