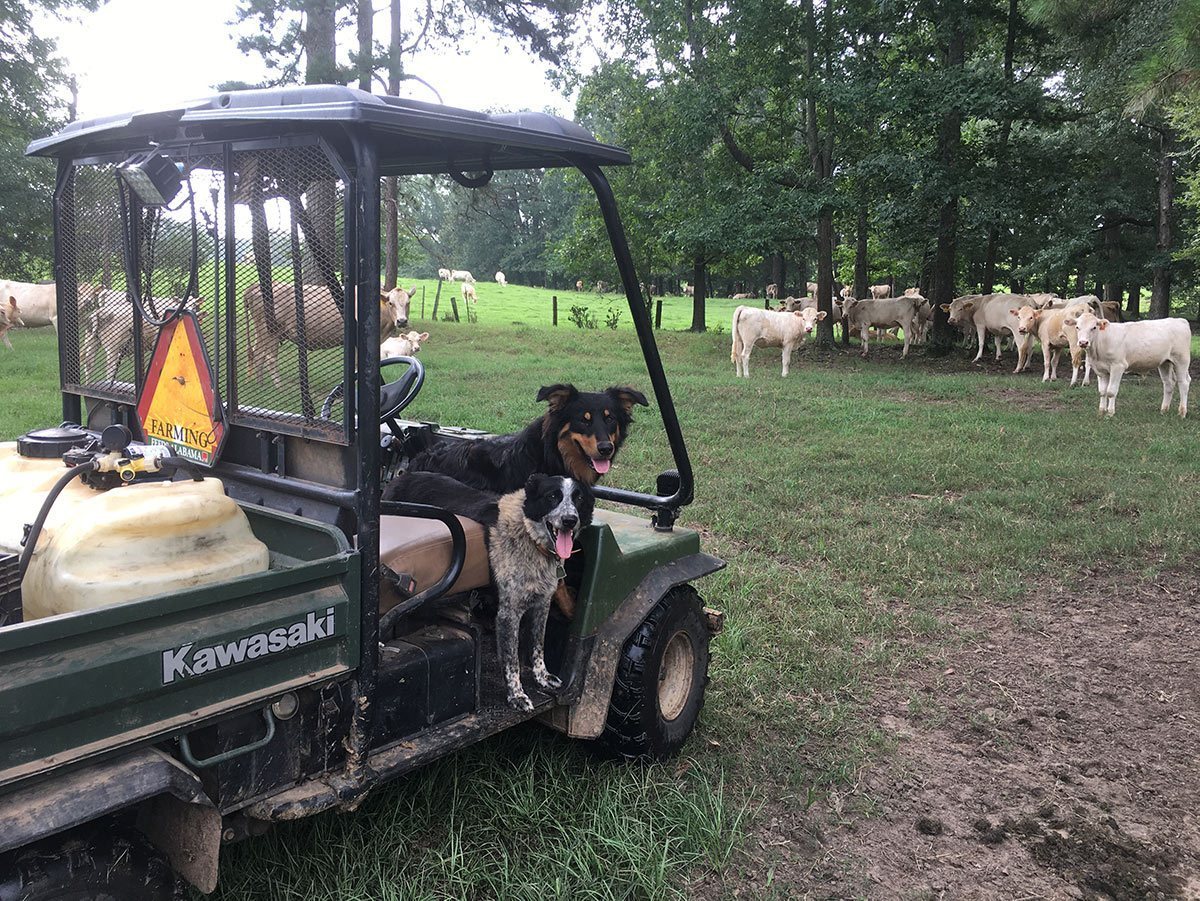 About 50 miles south of Montgomery, the July sun is setting on another hot summer day.  Mr. Steve Rogers keeps 200 head of Charolais cattle on 500 acres near Greenville, Alabama.   Charolais are among the heaviest of cattle breeds: bulls weigh from 2,000 to 3,000 lbs., and cows from 1,200 to 1,500 lbs. Their coat color ranges from white to cream-colored.  Their noses are pink.

For the most part, Steve is a one-man operation.  His son lends a hand when he is not working his full-time job for the railroad.  On this long, hot day, it is about dusk when Steve tells his wife he will be right back to join her for supper.  As he has done countless times before, the 68-year-old man heads over to his Kawasaki Mule and fires it up.  Right on cue, both Cain and Able hop up into the Mule with him.  Cain is an older dog, a mixed breed with some Australian shepherd in there.  And Able is a young, purebred Black and Tan English Shepherd.  The elder Cain is a laid-back good old boy who has learned over the years how to stay out of trouble.  But a few minutes earlier, young Able was getting scolded for tearing up Mrs. Rogers flower garden.  The junior Able is also a suspect in the investigation of some torn-up lawn chair cushions.

On his way out to the pasture, Steve notices a group of buzzards flying overhead.  As he gets closer, he discovers that one of his heifers has calved.  But, it is evident those buzzards have been harassing her and her newborn calf all afternoon.  Steve eases his utility vehicle into the pasture.  An agitated cow with a newborn calf requires caution.  The sky is getting dark, but he will have to ear-tag this calf before heading back for supper. Two strands of electrified barbed-wire fence enclose the cows’ pasture.  With his vehicle, Steve nudges the calf towards the fence, pushing it up to and then under the hot wire.

Now with a little more room to work on the other side of the fence, Steve goes about tagging the calf.   But before he knows what has happened, the upset heifer breaks through the fence and comes down on him.  On this hot summer day, she has had enough.  She’s gone through labor, had vultures harassing her, and now this guy is messing with her calf.  The cow bears down on the farmer with a storm of anger, momentum, and all her 1,300 lbs.  She keeps Steve pinned down, dragging him full circle around his own parked vehicle.  She pushes him into the sharp barbed wire.  The pointed fence barbs pierce his skin and tear his flesh.  Steve is bleeding plenty now. His wristwatch gets torn off, replaced with an open wound.  Steve can feel warm blood running down his neck.  And he is stocking-footed now, knocked out of his own shoes.  His mind is coming in and out.  The world around him is blurry, then dark. But Steve’s instincts know that to survive this he needs to get away.  He needs to get untangled and find some help.

And then the farmer hears a noise.  Yes, there it was again.  The unmistakable sound of a barking dog.  Out of the corner of his eye, Steve can see his young companion.  Not full-grown yet, not even a year old.  That juvenile Black and Tan English Shepherd he named Able is there now, and he’s making a stand.  Able has positioned himself between the injured man and the maddened, raging cow.  The young dog who was only a puppy a few minutes ago is now looking grown up.  Right here, right now, Able is earning his rightful place in this family.  He is earning the only title he will ever need – Alabama Farm Dog. Able is dodging in and out of the cow’s threatening range. All the while baying warnings and threats. Picking his spots, the shepherd’s dog occupies and distracts the larger animal.  Able is young, he is fit.  He has resolve and focus.  He was bred for this purpose; his ancestors were selected for it.  His breeding shines to the surface now, as he whittles down the beast.  He is wearing her out.  Between his strikes and parries, the Black and Tan English Shepherds looks at his owner and meets his eye.

Before he knows it, Steve has managed to regain his feet.  He’s heading off towards a nearby hill.  The pasture ground feels strange and unfamiliar to his stockinged feet.  But he barely notices.  Behind him, he can still hear the young shepherd’s dog barking to hold off the other animal. Now up on the hill, the relieved farmer finds his cell phone in his pants’ pocket.  He calls his son, who is here working on the farm today.  As quickly as the whole thing started, Steve is riding back to the house.  Looks like he’s going to miss supper while he takes a trip to the emergency room.  In the end, Steve will have to get about forty stitches.  To commemorate this hot summer day, he will have a few scars on his neck and one more on his arm.  But more than that, Steve Rogers has a new farm dog.  A loyal, capable Black and Tan English Shepherd named Able.

Able was bred by John Sherling of Sherling Farms